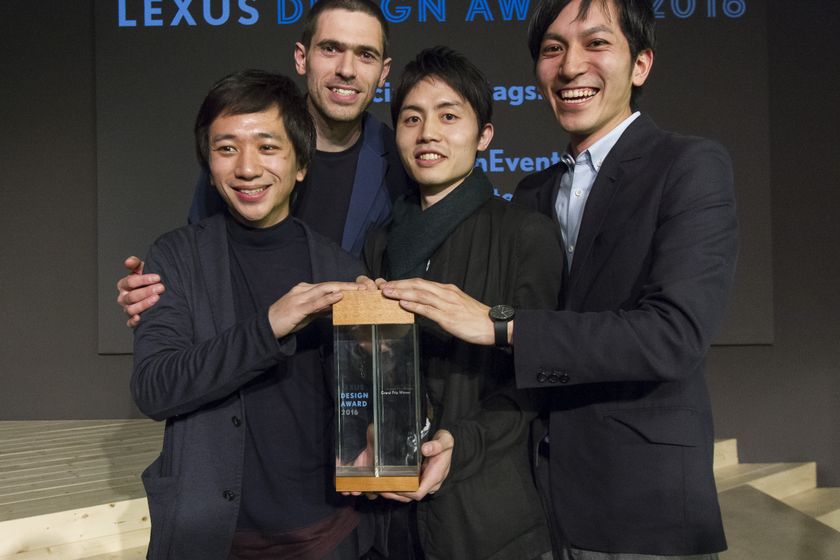 MILAN, ITALY, April 12, 2016 – Lexus International announced that an elite judging committee has named AGAR PLASTICITY by AMAM the Grand Prix winner of the Lexus Design Award 2016. AGAR PLASTICITY is a project exploring how agar, a gelatinous material obtained from marine algae, can be used as an environmentally friendly packaging material alternative to plastic.

SHAPE SHIFTERS by Angelene Laura Fenuta, a Canadian designer, was also selected as one of the top four finalists this year. SHAPE SHIFTERS applies modular principles to textiles, which allows the creation of different outfits from a single garment.

“The Lexus Design Awards is a great example of the focus Lexus places on design. Not only in our vehicles but in areas that touch our everyday lives and this is evident in the range of innovative submissions year after year,” said Jennifer Barron, Director, Lexus Canada. “This year is particularly exciting to see a Canadian designer among the top four. Lexus Canada congratulates Angelene on this great achievement.”

The selection was made based on presentations by the four prototype finalists at the “Lexus – An Encounter With Anticipation” exhibit at Milan Design Week 2016. The works of all 12 finalists are on display, including the Grand Prix winner’s prototype, the three other prototype works, and the eight panel displays of the remaining finalists. This year's Lexus Design Award drew 1,232 submissions representing a wide variety of highly innovative ideas from 73 countries. In keeping with the theme of Anticipation, many submissions were designed as yet unseen or undefined concepts that are likely to be realized in the near future.

From Tuesday, April 12 to 17, Lexus International will publicly open “Lexus – An Encounter With Anticipation” at Spazio Lexus – Torneria in Milan. The exhibit will present a unique encounter that features a special collaboration between the widely acclaimed design team Formafantasma and Michelin Star winning chef Yoji Tokuyoshi.

“Lexus – An Encounter With Anticipation” provides an unexpected and incomparable encounter that invites visitors to experience the world of anticipation. Visiting Japan, Formafantasma was impressed by Lexus’ committment to excellence in craftsmanship, integrity in its production, and responsibility in its use of technology. Anticipating the future, Lexus invites visitors to imagine what is yet unseen, and to see how Lexus delivers surprise and enchantment that create amazing experiences.

Lexus designed the three areas within the exhibition space to provide an immersive experience as visitors take a journey into its world of anticipation:

Lexus enables visitors to discover its commitment to craftsmanship and building fine cars in this area. The 18 beautiful stools positioned here are finished using the same paint process as that used on the Lexus LF-FC flagship concept, which was premiered at the 2015 Tokyo Motor Show. By viewing and touching these stools, visitors are able to experience the quality and depth of the colours. Also on display are the twelve finalists’ works, including the four prototypes, from which Shape Shifters by Angelene Laura Fenuta was named the Grand Prix winner. The winning designs of Lexus Design Award 2016 evoke a sense of anticipation, inviting visitors to walk through and discover the next generation of creators.

Lexus brings shape to previously unimagined designs, and does so in an unexpected fashion. In the center of a room with walls inspired by Japanese shoji, a dynamic floating three-dimensional image of the LF-FC takes shape in an unexpected way. The design creates a sense of anticipation as the viewer watches the concept assume physical dimensions. The display pays homage to the constant search for perfection demonstrated by the Lexus design team as they anticipate the future of mobility.

Lexus continually anticipates the needs of people and the environment as it demonstrates a keen sense for forward thinking and innovation. Inspired by the hydrogen-powered LF-FC, the installation uses advanced hydrogen fuel cell technology to light a kinetic sculpture inspired by the shape of a hydrogen atom, anticipating a future with clean technology that generates electricity while producing clear water as its only emission.

Clear water then becomes the inspiration for culinary treats, as Chef Yoji Tokuyoshi integrates water’s buoyancy and transparent properties to create a unique taste experience served with the spirit of Japanese hospitality. Chef Yoji Tokuyoshi is a rising star in the culinary world, expressing innovation and creativity through his creations. His new venue in Milan, Ristorante Tokuyoshi, was awarded a Michelin star just 10 months after it opened. Chef Yoji Tokuyoshi said his tasting experience would embody the theme of the new exhibit, Anticipation.

For pictures and more information:

Lexus Canada is the exclusive Canadian distributor of Lexus luxury cars and sport utility vehicles through a sales and service network of 38 dealers across Canada. Guests have access to a wide range of luxury vehicles with a total of 12 Lexus nameplates available in Canada, including the largest luxury hybrid lineup of 6 hybrid models. Lexus is committed to, and inspired by, great design – a passion for product, initiatives and events that represent “Amazing in Motion”. The Lexus RX 350 and RX 450h are built at Toyota Motor Manufacturing Canada’s (TMMC) award-winning Cambridge South plant. For more information about Lexus products, and Lexus’ pursuit of perfection, visit: www.lexus.ca.