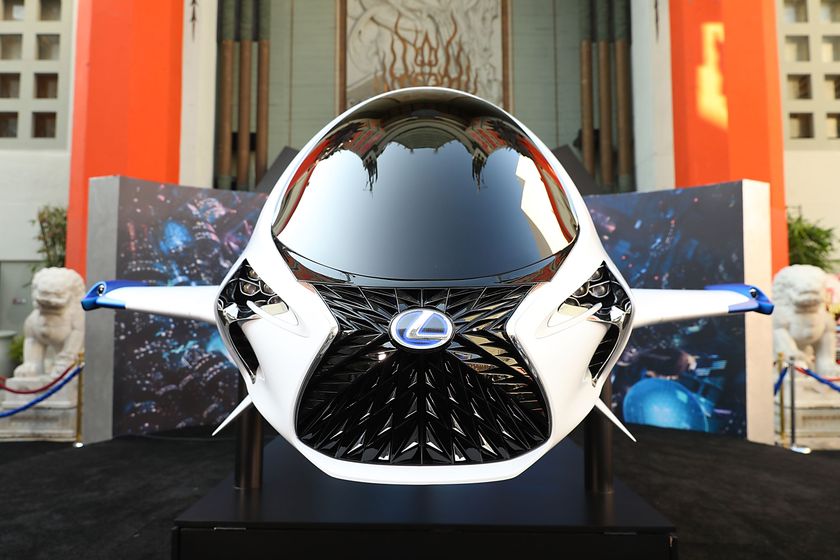 (TORONTO, ONTARIO - July 18, 2017) – Last night saw a milestone in the collaboration with Lexus and the film studio EuropaCorp with the futuristic SKYJET making its movie debut at the premiere of the hotly anticipated action adventure film, Valerian and the City of a Thousand Planets at the TCL Chinese Theatre, Hollywood. The single-seat space craft brought to life with the partnership was on full display on the red carpet where stars Cara Delevingne and Dane DeHaan celebrated the release of the film.

Joined by an all-star cast including Rihanna, and Kris Wu – Dane and Cara took time to pose for fans alongside the SKYJET, helping to bring a piece of the film’s magic to life to those gathered at the premiere. Valerian is the largest-budget European motion picture ever produced and the excitement and anticipation on the night was palpable.

The SKYJET - a single-seat pursuit craft featured in the film - was conceived by the Valerian team with the ambition of featuring a vehicle grounded in reality but befitting of the Valerian world, set 700 years in the future. The film’s creative team collaborated with the Lexus design team to incorporate some of the brand’s iconic design cues and advanced technologies to create the final SKYJET.

Commenting on the premiere, Spiros Fotinos, Head of Global Brand Management & Marketing at Lexus, said: “It was great to see the SKYJET on the red carpet and the fantastic reaction from the fans. The film reminds us that the future is whatever we imagine it to be. As a brand, this drives our curiosity and inspires us to make sure it is an amazing experience.”

Learn more about the design of the SKYJET here: https://www.lexus-int.com/lexus-skyjet/first-look

Learn more about VALERIAN AND THE CITY OF A THOUSAND PLANETS on:

ABOUT VALERIAN AND THE CITY OF A THOUSAND PLANETS

Based on the French comic series Valérian and Laureline by Pierre Christin and Jean-Claude Mézières, published by Dargaud - visionary writer/director Luc Besson advances this iconic source material into a contemporary, unique and epic science fiction saga produced by Virginie Besson-Silla.

Valerian (Dane DeHaan) and Laureline (Cara Delevingne) are special operatives for the government of the human territories charged with maintaining order throughout the universe. Under directive from their Commander (Clive Owen), Valerian and Laureline embark on a mission to the breathtaking intergalactic city of Alpha, an ever-expanding metropolis comprised of thousands of different species from all four corners of the universe. Alpha’s seventeen million inhabitants have converged over time- uniting their talents, technology and resources for the betterment of all. Unfortunately, not everyone on Alpha shares in these same objectives; in fact, unseen forces are at work, placing our race in great danger.

EuropaCorp is one of Europe’s leading film studios. Founded in 1999, EuropaCorp has operations spanning production, theatrical distribution, video and VOD, and French TV sales. EuropaCorp also has international rights, partnerships and licensing, production and soundtrack publishing activities. The Group has also been producing TV series since 2010. EuropaCorp’s integrated business model allows it to benefit from diversified sources of revenue. With a line-up boasting various types of films and a very strong foothold in international markets, the Group has produced France’s biggest international hits in recent years. In 2014, EuropaCorp entered direct distribution for its films in the United States. EuropaCorp was founded by French filmmaker, screenwriter and producer Luc Besson. The Group owns a catalogue of 500 movies. For more information, go to www.europacorp-corporate.com