“The Lexus Design Award always presents a fascinating survey of the issues currently engaging young designers, and what they consider to be the most important challenges and compelling opportunities for design today. However, the quality and scale of ambition of the submissions to this year's award program was truly exceptional. It was very difficult for us to whittle them all down to twelve finalists, then four prototype winners and finally to the Grand Prix winner, although every stage of  the process generated a feisty and enjoyable debate. Each of the four prototype winners has wrestled with complex and significant issues, from the plight of refugees and other homeless people and providing environmental protection  for buildings in a beguiling and poetic way, to fusing traditional craftsmanship with emerging technologies and encouraging children to make and play musical instruments. Eclectic and original though their responses are, all the finalists have addressed the defining theme of the Lexus Design Award 2017, YET, with tremendous imagination, versatility and aplomb.” said Alice Rawsthorn, Lexus Design Award 2017 judge and a design commentator.

Hiroto Yoshizoe commented, “I'm so surprised and honored to receive this prize from Lexus Design Award. I would like to thank Alex and Daniel of Snarkitecture for all their mentorship, also to all the people who have supported me on this project and of course to Lexus for giving me this amazing opportunity.”

First launched in 2013 to stimulate ideas for a better tomorrow, Lexus is celebrating the 5th anniversary of this international design competition which supports up-and-coming designers and creators worldwide. The Grand Prix winner was chosen by an elite global creative design panel after presentations by the four prototype finalists. The works of all 12 finalists -- four prototype winners and eight panel winners -- are on display at the LEXUS YET pavilion, revealing how they would apply  the ‘YET’ philosophy in original and innovative ways.

This event marks the tenth edition for Lexus International at Milan Design Week, highlighting the brand’s long standing passion for design and innovation. To celebrate this significant juncture, Lexus enlisted the cooperation of Architect, Designer and Professor Neri Oxman of the MIT Media Lab and her research and design team, The Mediated Matter Group. An acclaimed creative pioneer operating at the leading edge of architecture and design, Oxman is known for design innovation that is inspired and informed by the natural world. Oxman’s vision of harmonizing “nature”  and  its seeming opposite “technology” resonates strongly with the Lexus ‘YET’ philosophy*.

In addition to the Lexus Design Award 2017 display, the LEXUS YET exhibition is composed of three following areas where visitors will experience the exciting and infinite potential of YET through immersive and engaging installations.

Inspired by Lexus’ ‘YET’ philosophy and created for the opening space, this installation aims to create the experience of being grounded YET suspended by light – a wave YET a particle. Utilizing an ancient material YET a modern technology, The Mediated Matter Group debuts Glass 3D Printing at architectural scales.

By exploring things from many angles, we are able to see beyond the obvious and discover the new and unexpected. This Static YET Dynamic installation reveals the Lexus UX Concept car, and expresses Lexus Brave Design. The Lexus’ UX Concept car embodies our ‘YET’ philosophy. This expression of a progressive and strong YET artistic  and  premium product further enhances Lexus' unique brand position which challenges conventional ideas about luxury.

This event marks Lexus’ 10th edition at Milan Design Week, highlighting the brand’s long standing passion for design and innovation. As we celebrate this opportunity, we take a look back at our 9 years of design inspiration. Each  edition highlights one moment in time through 24 frames.

* The ‘YET’ philosophy drives Lexus to push the boundaries of creativity by fusing seemingly incompatible elements. It says “Don’t compromise; harmonize.” The resulting synergy sparks breakthroughs, while revealing possibilities beyond imagination. 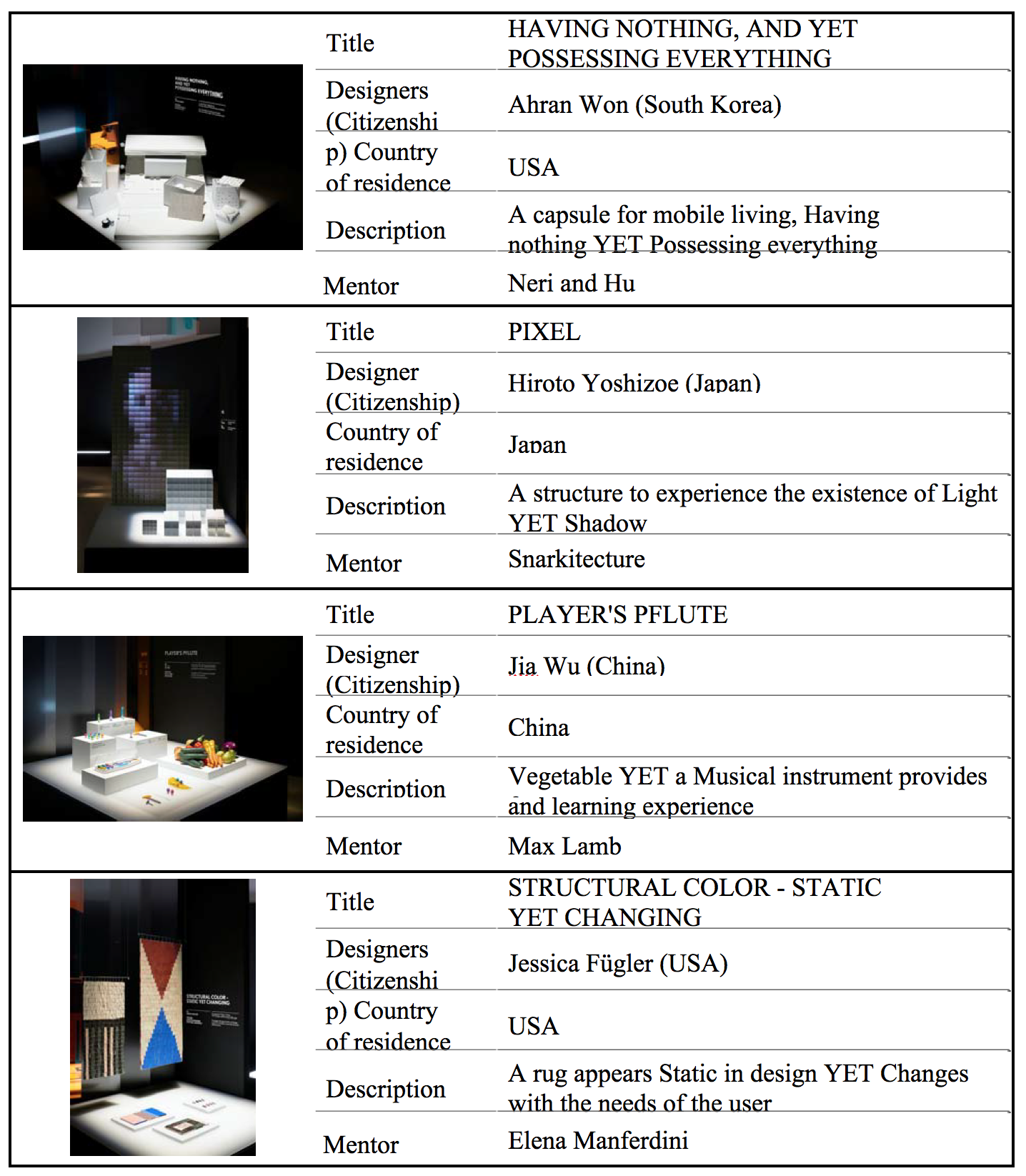 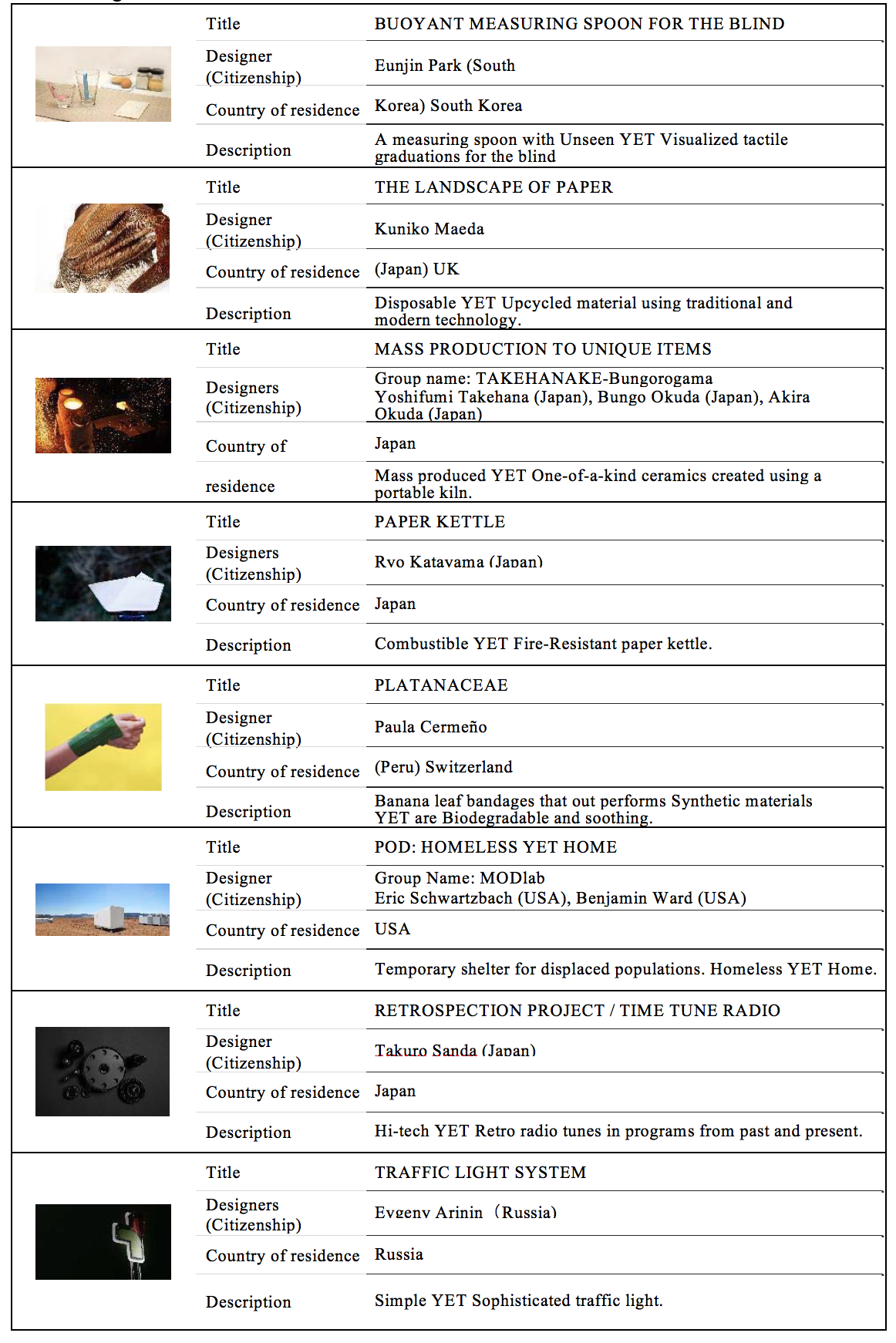 Antonelli joined The Museum of Modern Art in 1994 and is a Senior Curator in the Department of Architecture and Design, as well as MoMA’s Director of Research and Development. She has lectured at TED, the World Economic Forum in Davos, and several other international conferences. Her goal is to insistently promote understanding of design until its positive influence on the world is fully acknowledged and exploited. She is currently working on several shows on contemporary design, and on States of Design, a book about the diversity and variety of design fields that exist today.

Aric Chen is Lead Curator for Design and Architecture at M+, the new museum for visual culture currently under construction in Hong Kong’s West Kowloon Cultural District. He previously served as Creative Director of Beijing Design Week, leading the successful relaunch of that event in 2011 and 2012. Chen has curated and organized numerous exhibitions and projects at museums, biennials and other events internationally, and has been a frequent contributor to publications including The New York Times, Monocle, Architectural Record and PIN-UP.

Ito graduated from the University of Tokyo, Department of Architecture in 1965. His main works include: Sendai Mediatheque, Tama Art University Library (Hachioji), Taiwan University, College of Social Sciences (Taiwan R.O.C), ‘Minna no Mori’ Gifu Media Cosmos, etc. Projects Under development include: National Taichung Theater (Taiwan R.O.C), New Athletic Field and Sports Park in Aomori (tentative title) and several others. Among his many honors are the Architectural Institute of Japan Prize, Golden Lion at the Venice Biennale, Royal Gold Medal from The Royal Institute of British Architects and the Pritzker Architecture Prize.

Born in Hamburg, Lohmann studied industrial design in Florence before moving to Milan, where she has lived and worked since 1987. She worked as a designer and product development manager for a number of Italian architects and master designers. She has also worked as a design historian for justice departments and international auction houses. As a researcher and lecturer, she has conducted seminars on industrial design at a number of prestigious international universities. In 1999, she co-founded designboom, where she is currently the Chief Editor, Head of Educational Programming and Curator for International Exhibitions.

Alice Rawsthorn writes about design in the International New York Times and frieze. Her latest book Hello World: Where Design Meets Life explores design’s impact on our lives: past, present and future. She speaks on design at global events including TED and the World Economic Forum’s annual meetings at Davos, Switzerland. Based in London, Alice is chair of trustees of the Chisenhale Gallery and the contemporary dance group Michael Clark Company, and a trustee of the Whitechapel Gallery. She was awarded an Order of the British Empire  (OBE)  for  services  to design and the arts.

Yoshihiro Sawa graduated with a Bachelor of Science degree in Engineering and Design from Kyoto Institute of Technology. He has held a number of design-related positions since joining Toyota Motor Corporation in 1980, including Chief Officer of Global Design, Planning Division. He became President of Lexus International in April 2017.

Lyndon Neri and Rossana Hu, cofounders of Neri & Hu Design and Research based in Shanghai, have been working on projects around the world which incorporate overlapping design disciplines to create a new paradigm in architecture. In 2014, Wallpaper* announced Neri & Hu as 2014 Designer of The Year. In 2013, they were inducted into the U.S. Interior Design Hall of

Fame. Neri & Hu believes strongly that research is a key design tool as each project brings its own unique set of contextual issues. Providing architecture, interior, master planning, graphic and product design services, Neri & Hu recognizes that contemporary problems relating to buildings extend beyond the boundaries of traditional architecture. Rather than starting from a formulaic design, Neri & Hu’s work is anchored in the dynamic interaction of experience, detail, material, form and light.

Max Lamb’s work plays with the tradition of the working rural landscape — the beach as foundry, the quarry as workshop, felled yew trees of the Chatsworth estate as subject and source material. He is equally fascinated by the city, and his ability to adapt and respond to different environments produces designs that are uniquely of their time and place.

Max is not committed to a single material or process, nor is he attracted to design as a means to solve problems. Rather he exploits the qualities inherent in a material to draw out its natural tendencies and beauty. His methods are high- and low-tech, and he is both designer and manufacturer, collaborating with foundries and factories as the scale or complexity of the project necessitates. However, there is continuity in the principles that he applies — honesty to material, a celebration of the process and of human capability, and its limitations.

Elena Manferdini, founder and owner of Atelier Manferdini, with offices in Venice, California, has completed design, art and architectural projects in the United States, Europe and Asia including the Pavilion of the Museum of Contemporary Art in Los Angeles. Her firm has collaborated with internationally renowned companies such as Swarovski, and Sephora and her work has been featured in journals and publications including Elle, Vogue and the New York Times. Currently Graduate Chair at the Southern California Institute of Architecture she exhibits internationally and lectures widely having spoken at MIT, Princeton, Tsinghua University and Bauhaus. She was recently awarded the 2013 COLA Fellowship to support the production of original artwork. In

2011 she received a prestigious annual grant from United States Artists (USA) and her Blossom design for Alessi received the Good Design Award.

In 2008 Daniel Arsham and Alex Mustonen founded Snarkitecture, a collaborative and experimental practice operating in territories between art and architecture. Sharing a mutual interest in the intersection of art and architecture since their student days together at Cooper Union in New York, their first commission was for Dior Homme. Deriving its name from Lewis Carroll’s fanciful poem “The Hunting of the Snark”, Snarkitecture designs permanent, architectural scale projects and functional objects with new and imaginative purposes, creating moments of wonder and interaction that allow people to engage directly with the surrounding

environment. Transforming the familiar into the extraordinary, Snarkitecture makes architecture perform the unexpected.

First launched in 2013, the Lexus Design Award is an international design competition that targets up-and-coming creators from around the world. The award seeks to foster the growth of ideas that contribute to society by supporting designers and creators whose works can help to shape a better future. This provides a unique opportunity for four finalists to work with globally recognized designer as a mentor to create prototypes of their designs, and then exhibit them at one of the design calendar's most important events.

Since its U.S. market debut in 1989, Lexus has earned a worldwide reputation for high-quality products and exemplary customer service. Renowned for the superior reliability of its vehicles, Lexus is the luxury hybrid leader, offering hybrids that combine innovative technology and premier luxury. To date, Lexus has grown into 90+ markets worldwide. The evolution of Lexus is not only reflected in the progressive designs of its latest vehicles, but also in the brand’s mission to captivate the next generation of luxury consumers with consciousness, products, and services that are visionary, original and exciting. http://www.lexus-int.com

UX
‹ back
Every effort has been made to ensure the product specifications, equipment, and content on this site are accurate based on information available at time of publishing. In some cases, certain changes in standard equipment or options may occur, which may not be reflected online. Toyota Canada reserves the rights to make these changes without notice or obligation.