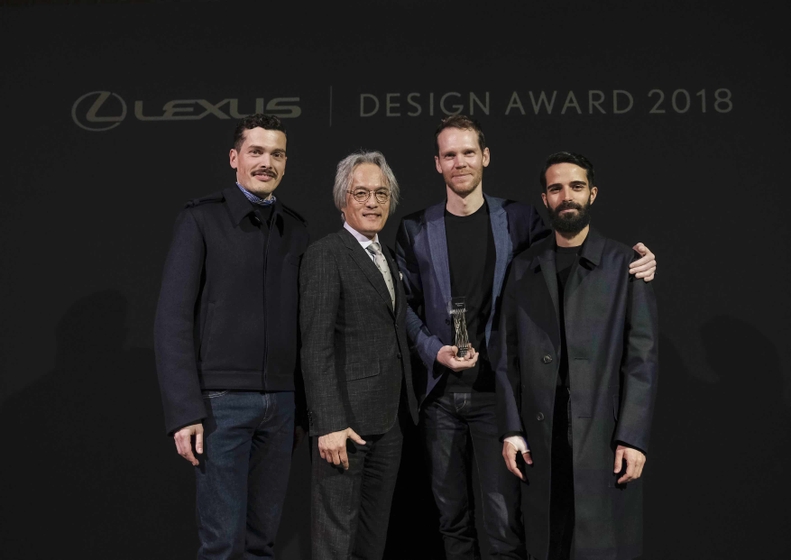 MILAN (April 17, 2018) — Lexus International today announced the Grand Prix winner of the Lexus Design Award 2018 – Testing Hypotheticals by Extrapolation Factory – bringing the sixth edition of the Award to a pinnacle of excitement. The 2018 Lexus Design Award drew a record 1319 entries from 68 countries under the theme of “CO-“. The winner was selected by a group of design luminaries: Sir David Adjaye, Shigeru Ban, Paola Antonelli, Birgit Lohmann, Alice Rawsthorn, and Yoshihiro Sawa.

“This year’s winner permeates the current thinking about the role of design in our evolving and technologically shifting societies. Products played less of a role, and design education/teaching and thinking are at the forefront. How citizens and designers interact with products, processes and future is increasingly critical to mediating this influence of design in our increasingly future-orientated and technologically evolving world. The chosen design shows methods and techniques for engaging the public and designers in role playing possible futures and negotiating the influences of our technological world.” said David Adjaye, Lexus Design Award 2018 judge and architect.

Elliott P. Montgomery of Extrapolation Factory commented, “It was truly fantastic, and the experience was incredible to have worked with our mentors Formafantasma. We could not have done this without the support of Lexus.”

Since 2013, the Lexus Design Award has supported the next generation of designers from around the world. For its sixth year in 2018, the Award’s theme is “CO-”, a Latin prefix meaning with or together. Lexus believes that great design can ensure the harmonious coexistence of nature and society. In that sense, “CO-" is an approach that allows the brand to explore its true potential and that of the environment by creating new possibilities through collaboration, coordination and connection.

From among the wealth of “CO-” design submissions, our elite judging committee has selected 12 finalists, four to be prototyped and eight to be shown as display panels. These will be revealed to the international design community at Lexus’ “LIMITLESS CO-EXISTENCE” exhibition, held 17-22 April 2018 in the Cavallerizze in Museo Nazionale della Scienza e della Tecnologia Leonardo da Vinci during Milan Design Week, the world's premiere design event.

For this exhibit, Lexus has called upon Japanese architect Sota Ichikawa to be the overall concept space designer. In the main installation, Ichikawa has used innovative methods to represent the ultimate experience of LIMITLESS CO-EXISTENCE. The Lexus LF-1 Limitless concept, earlier introduced at the North American International Auto Show, is also featured using Ichikawa’s unique method.

Following the strong engagement of the public with the Lexus Design Award displays in the past, Lexus has created the “LEXUS DESIGN AWARD 2018 PEOPLE’S CHOICE” allowing even more interaction than ever before. The winner is determined by votes cast on the website from 16 to 21 April and announced on 22 April, the event's final day.

Sir David Adjaye / Architect
Sir David Adjaye OBE is the principal and founder of Adjaye Associates. Born in Tanzania to Ghanaian parents, his broadly ranging influences, ingenious use of materials and sculptural ability have established him as an architect with an artist’s sensibility and vision. His largest project to date, the $540 million Smithsonian Institute National Museum of African American History and Culture, opened on the National Mall in Washington DC in fall of 2016 and was named Cultural Event of the Year by the New York Times. In 2017, he was knighted by Queen Elizabeth II and was recognized as one of the 100 most influential people of the year by TIME magazine.

Paola Antonelli / Senior Curator MoMA
Paola Antonelli is Senior Curator of Architecture & Design at The Museum of Modern Art, as well as MoMA’s founding Director of Research & Development. Her goal is to promote design’s understanding, until its positive influence on the world is universally acknowledged. Her work investigates design’s impact on everyday experience, often including overlooked objects and practices, and combining design, architecture, art, science and technology. She has curated numerous shows, written several books, and lectured worldwide. She has taught at the University of California, Los Angeles; the Harvard Graduate School of Design; and the MFA programs of the School of Visual Arts in New York. She is currently working on an exhibition on the 111 garments that changed the world; on Design Bites, a book about foods from all over the world appreciated as examples of design; and on a book collecting her essays on the different fields of contemporary design.

Alice Rawsthorn / Design Commentator
Alice Rawsthorn is an award-winning design critic, who has written about design for the New York Times for over a decade. Her latest book Hello World: Where Design Meets Life explores design’s impact on our lives. Her next book, Design as an Attitude, is to be published in May 2018 as a survey of design today.  Alice speaks on design at important global events including TED and the World Economic Forum’s annual meetings at Davos, Switzerland. Based in London, she is chair of trustees of the Chisenhale Gallery and the contemporary dance group Michael Clark Company, and a trustee of the Whitechapel Gallery. Alice was awarded an Order of the British Empire (OBE) for services to design and the arts.

Yoshihiro Sawa / President of Lexus International
Yoshihiro Sawa graduated with a Bachelor of Science degree in Engineering and Design from Kyoto Institute of Technology. He has held a number of design-related positions since joining Toyota Motor Corporation in 1980, including Chief Officer of Global Design, Planning Division. He became President of Lexus International in April 2017.

Lindsey Adelman / Designer
Decades before founding her eponymous studio, Lindsey Adelman was already a designer — just not publicly so. First, she was simply a precocious, curious child, building endlessly in the backyards of suburban New York, uncertain of how to make a career of it; then, an English student at Kenyon College; then, on the editorial staff at The Smithsonian Institution. Fortunately, there, her accidental discovery of industrial design — in the literal form of a fabricated foam French fry —  propelled her off to RISD to make a life of that childhood passion. Today, from her studios in New York and Los Angeles, she manipulates light to create fixtures that are as emotive as they are physically transformative — objects imbued with their own history and meaning, often unselfconsciously so, that give color and texture and depth to the world around them.

Formafantasma / Designer
Andrea Trimarchi and Simone Farresin are Studio Formafantasma, Italian designer duo based in Amsterdam, Netherlands. They have developed a coherent body of work characterized by experimental material investigations and explored issues such as the relationship between tradition and local culture, critical approaches to sustainability and the significance of objects as cultural conduits.  Their work has been presented and published internationally and museums such as New York's MoMA, London’s Victoria and Albert, New York's Metropolitan Museum, the Chicago Art Institute, the Textiel Museum in Tilburg, the Stedelijk Museum 's-Hertogenbosch, MUDAC Lausanne, the Mint Museum of Craft and Design in North Carolina and the MAK Museum in Vienna have all acquired Formafantasma’s designs for their permanent collections.  Andrea and Simone are lecturing and heading workshops in various Universities and Institutions. Currently teaching at the ‘Well Being’ and 'Contextual Design' Departments of the Design Academy Eindhoven and they are at the head of the Design bachelor at MADE Program in Siracusa, Italy.

Sou Fujimoto / Architect
Sou Fujimoto was born in Hokkaido in 1971. Graduated from the Department of Architecture, Faculty of Engineering at Tokyo University, he established Sou Fujimoto Architects in 2000. In 2016, he has won the 1st prize for“Pershing”, one of the sites in the French competition called 'Réinventer Paris', following the victories in the Invited International Competition for the New Learning Center at Paris-Saclay Ecole Polytechnique and the International Competition for the Second Folly of Montpellier in 2014. In 2013, he became the youngest architect to design the Serpentine Gallery Pavilion in London. His notable works include; “Serpentine Gallery Pavilion 2013” (2013), “House NA” (2011), “Musashino Art University Museum & Library” (2010), “Final Wooden House” (2008), “House N” (2008) and many more.

Jessica Walsh / Designer
Jessica Walsh is a designer & art director working as a partner at NYC based design firm Sagmeister & Walsh. She lectures about design at creative conferences and universities internationally and teaches design at The School of Visual Arts in NYC. Her work has won numerous awards from most major design competitions including Type Director’s Club, Art Directors’ Club, SPD, Print, New York Festivals, D&AD, TDC Tokyo, and Graphis, among many others. She has been awarded Forbes “30 under 30 top creatives designing the future” and Ad Age’s “Top 10 Visual Creatives". Her work has been featured in numerous books & magazines. Clients include the Museum of Modern Art, The Jewish Museum, Jay-Z, Snapchat, Barneys, The New York Times, Levis, Adobe, and The School of Visual Arts. She hosts mentorship programs for creative women through her initiative Ladies, Wine & Design; which has spread to over 110 chapters around the world. Her blog & book “40 Days of Dating” received over 10 million readers and is currently being turned into a movie by Warner Brothers.

ABOUT LEXUS DESIGN AWARD
First launched in 2013, the Lexus Design Award is an international design competition that targets up-and-coming creators from around the world. The award seeks to foster the growth of ideas that contribute to society by supporting designers and creators whose works can help to shape a better future. It provides a unique opportunity for four finalists to work with globally recognized designer as a mentor to create prototypes of their designs, and then exhibit them at one of the design calendar's most important events.