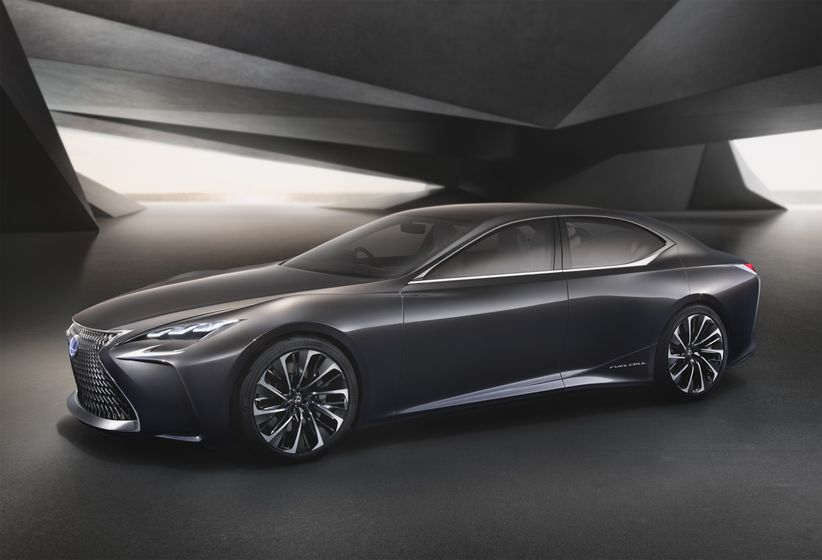 (TOKYO, JAPAN – October 28, 2015) Taking centre stage in the Lexus booth at the Tokyo Motor Show is the LF-FC flagship concept, a visionary new vehicle that offers a peek into the design and technology direction of the brand’s future flagship sedan.

“Lexus wants to surprise and evoke emotion with its distinctive design and forward-thinking technology.  For us, it is more than just a car, and we should exceed conventional imagination.  The LF-FC expresses our progressive luxury and high-tech vision of a not so distant future”, said Tokuo Fukuichi, Lexus International President.

The LF-FC features a fresh new styling theme that embodies Lexus’ “L-finesse” design philosophy. From every angle, the sedan is aggressively elegant, exuding the spirit of a grand touring vehicle.  An evolved version of Lexus’ signature grille with a new mesh design dominates the front, while floating “L-shaped” daytime running lights (DRL) extrude flawlessly from the front fenders. The rear is highlighted by striking new taillights that adopt the same floating theme as the DRL. When seen from its profile, the LF-FC’s true character is revealed. The roofline flows from front to rear in the manner of a “4-door coupe,” suggesting that this vehicle isn’t just meant for straight highways, but to also be enjoyed on twisty roads. The sporty 21-inch aluminum wheels with carbon fiber reinforced plastic (CFRP) rims, add an extra dose of flair to what is already a dynamically styled machine.

The spacious interior of the LF-FC has been designed to wrap its occupants in a comfortable yet futuristic environment, while providing the driver with a highly-functional cockpit. The cabin has been designed in two sections, top and bottom. The top conveys a sense of openness, allowing the driver to concentrate on the road ahead without feeling constrained. When seen at eye level, the front seats seem to be floating. The rear seats have been designed for those who enjoy being driven, offering a reclining feature and plenty of head and knee space. High-quality aniline leather on the seats, doors and dashboard enhances the level of luxury of the interior.

Highlighting the new technology inside the LF-FC is an advanced human machine interface that can be operated by simple hand gestures, without the need to touch a panel or controls. A small holographic image on the center console indicates where the system can interpret your hand gestures to control the audio system and ventilation.

At the heart of the LF-FC is a high output fuel cell power system that energizes the rear wheels, and also sends power to two in-wheel motors in the front, making the LF-FC all-wheel-drive. This innovative drive system allows precise torque distribution control between the front and rear wheels, giving the full-size sedan exceptional dynamic handling and superior road stability. The strategic placement of the fuel-cell stack at the rear of the vehicle, power control unit at the front and T-formation configured hydrogen fuel tanks result in front and rear weight distribution optimal for a sporty sedan.

Using automated driving technologies, with elevated traffic environment recognition, prediction, and judgment function, the LF-FC provides a safe and efficient driving experience for its occupants and supports the vision of a world without traffic accidents.

Lexus Canada is the exclusive Canadian distributor of Lexus luxury cars and sport utility vehicles through a sales and service network of 38 dealers across Canada. There are 11 Lexus nameplates on the road today, allowing guests many choices in a range of luxury vehicle segments. Six of these 11 offer hybrid models, giving Lexus Canada’s largest luxury hybrid lineup. In the 2014 J.D. Power and Associates Vehicle Dependability StudySM (VDS), Lexus ranked highest in vehicle dependability among all nameplates for the third consecutive year. Additionally, the Lexus RX and RXh are built at Toyota Motor Manufacturing Canada’s (TMMC) Cambridge South plant, the recipient of J.D. Power’s 2014 Platinum Plant Quality Award, Worldwide. For more information about Lexus products, and Lexus’ pursuit of perfection, visit: www.lexus.ca.