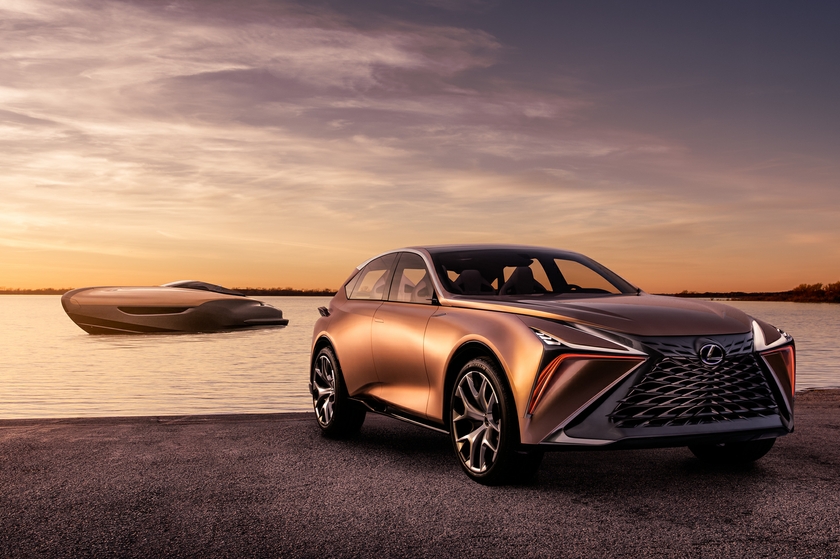 TORONTO, ONTARIO, March 9, 2018 – The unique Lexus Sport Yacht concept was recognized with a special award by Japan’s “Boat of the Year” committee at the Japan International Boat Show in Yokohama today.

The one-of-a-kind Lexus Sport Yacht stunned the automotive and yachting worlds when it was revealed in January 2017 at an exclusive media event in Miami by Toyota Motor Corp. president Akio Toyoda along with Yoshihiro Sawa, president of Lexus International, and Shigeki Tomoyama, Toyota Motor Corp. executive vice president with responsibilities including Toyota Marine.

The Lexus Sport Yacht concept was conceived by Lexus Design to explore new areas of luxury and active lifestyles.  It was engineered by the Toyota Marine Division and a single running proof-of-concept was built in partnership with Marquis-Larson Boat Group of Pulaski (Green Bay) Wisconsin, USA.

“Based on our amazing experiences in engineering, building, testing and showing the Lexus Sport Yacht concept last year, we’ve decided to take the next bold step of producing an all-new larger yacht that builds on the advanced nature of the concept while adding more comfort and living space,” Tomoyama said. “We plan to start sales in the U.S. in the latter half of 2019, with sales in Japan following in the spring of 2020.”

The new yacht builds on the partnership with Marquis-Larson, leveraging their renowned boat manufacturing expertise.  Planned as a larger 65-foot sport fly-bridge cruiser, the new yacht will have luxury staterooms below deck and entertaining space for up to 15 guests.

Specifications, pricing and other details of the 65-foot yacht will be announced at a later date.

The Lexus Sport Yacht concept was a one-of-a-kind vision by Lexus Design. Engineered by the Toyota Marine Division, a single running concept was built in partnership with Marquis-Larson Boat Group of Pulaski (Green Bay) Wisconsin, USA.

The Lexus Sport Yacht concept carries up to 8 guests on board in high-speed luxury with a high-tech multi-media entertainment system and beautiful hand-made woods and leather.

Toyota Marine founded in 1990 and based at Laguna Gamagori in Aichi, Japan, is one of the largest makers of premium yachts in Japan. Toyota Marine’s Ponam lineup includes fiberglass sport-fishing boats from 26 to 30 feet long and luxury cabin-cruisers in 31- and 35-foot lengths with fully-welded aluminum alloy hulls, each powered by a marinized version of the turbodiesel engine of the Lexus GX300d (3.0-liter turbodiesel 4 cylinder) or LX450d (twin-turbo diesel 4.5-liter V8) luxury utility vehicles. Toyota Marine has previously earned Japan Boat Of The Year recognition for the following models:

The “Boat Of The Year” awards are selected by a committee of 30 Japanese marine journalists.The Japan International Boat Show is the largest exposition of the Japanese marine industry, held this year from March 8 to 11, 2018, at the Yokohama Bayside Marina and Pacifico Yokohama near Tokyo.

Marquis-Larson Boat Group is an independent privately-owned company in Pulaski (near Green Bay), Wisconsin, that designs, engineers and manufactures the brands of Marquis Yachts and Carver Yachts and Larson boats. The pinnacle of their line is the Marquis 720 three-level luxury yacht with fiberglass reinforced plastic (FRP) hull, deck and superstructure. For more information please see www.MarquisYachts.com or www.LarsonBoatGroup.com.