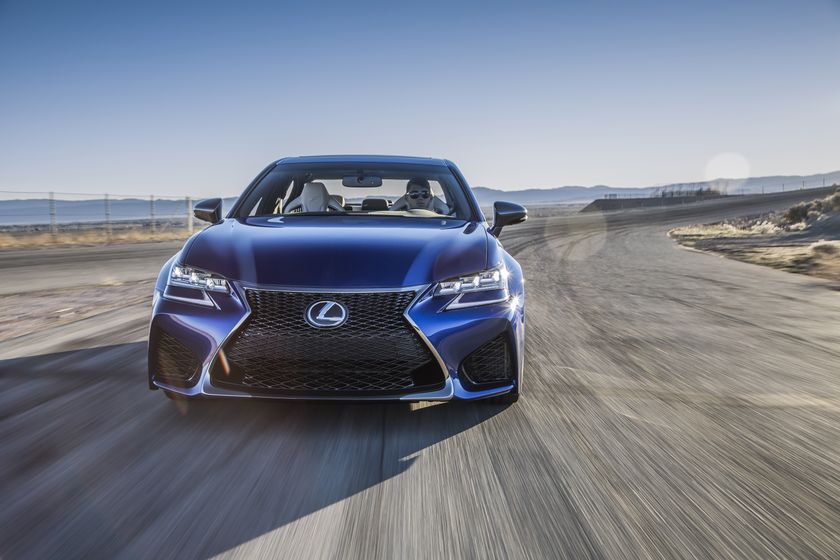 (DETROIT, USA – January 13, 2015)  Exotic-car performance, four doors, and enough cabin space to comfortably accommodate five adults. Previously, only a few automobiles in the world possessed these traits, but not anymore. Today, Lexus has joined the ranks of the super sports sedan-maker with the introduction of the GS F at the North American International Auto Show.

The much-anticipated GS F sports sedan, which combines the opulence of a leading luxury cruiser with the performance of a world-class sports car, is the latest vehicle to join the company’s high-performance “F” line which already includes notable examples such as the RC F. Based on the mid-size GS luxury sedan, the GS F breaks new ground for Lexus as the largest vehicle ever offered with an “F” badge. Not to be confused with the GS F SPORT, the GS F will have enhancements throughout, including its engine.

“The cars with the ‘F’ designation are meant to generate a very positive feeling when you’re behind its steering wheel, to be something that’s fun to drive no matter who is driving or where it’s being driven. With the GS F, we wanted to make a special car that not only would exceed the expectations of the most discerning driving enthusiast, but also something that all people can enjoy. In that way, the GS F embraces the virtues sound, response and power, the cornerstones of the Lexus ‘F’ brand,” Yukihiko Yaguchi, the chief engineer of the GS F, said.

Under the hood will be a fire-breathing naturally-aspirated 5.0-litre V-8 that produces a remarkable 467 hp and peak torque in excess of 389lb.-ft. The powerplant will be mated to a lightning quick 8-speed automatic gearbox with manual-shifting capabilities and three different driving modes: Normal, Sport S and Sport S+, the latter designed specifically for the racetrack. With the GS F tipping the scales at a lean 1830 kg (4034 lb.), the acceleration of the new rear-wheel-drive sedan will be on par with some of the world’s leading sports cars while its top speed should give some racecars a run for their money. As powerful as the engine is, the DOHC 32-valve powerplant is also fuel efficient, incorporating the Atkinson cycle in given situations.

Handling Honed on the Famed Nurburgring

The GS F will feature structural reinforcements and an exclusively designed suspension system to match the car’s added power. The newest member of the “F” line boasts remarkable sports-car-like handling, which was honed not only in circuit in Japan but also perfected on the famous Nordeschleife of the Nürburgring in Germany. The car’s custom taut suspension, along with larger tires (255/35-19 front, and 275/35-19 rear) and an upgraded braking system, complete with bright orange calipers, combine to give the GS F remarkable high-speed stability and the agility of a nimble sports car. Those items provide near-neutral handling balance through most every kind of corner.

Lexus’ innovative Torque Vectoring Differential (TVD), also found in the RC F, will be part of a long line of standard equipment that’ll make the GS F’s performance stand out from the crowd. The TVD features three operating modes:

The GS F features an enlarged, and more pronounced version of Lexus’ trademark “spindle” grille, with a distinctive mesh pattern reserved for F models, and large gaping air vents that have been flawlessly integrated into the front fascia. Slim canted headlights with the signature Lexus “L-shaped” DRL complete the car’s elegant-yet-sporty face. The GS F sits noticeably lower and wider than other GS models, resulting in an aggressive stance that along with its front fender air outlets and sporty 19-in. alloy wheels, make it instantly recognizable as an F. The rear is highlighted by a subtle carbon-fiber rear spoiler and “trapezoidal tailpipes,” with four chrome exhaust tips, that powerfully suggest that this car is meant to be driven hard.

Inside the sheet metal, the GS F’s cabin has been spiced up to exude the look and feel of the cockpit of a fighter jet. The interior is styled in an elegant form-follows-function theme, with all controls placed within easy reach of the driver. Residing behind the exclusive “F” sport steering wheel, is a new electronic instrument cluster that can be configured between four different displays, depending on your preferred driving style: Normal, Eco, Sport S and Sport S+. Also, custom front and rear seats have been implemented to provide the vehicle’s occupants with more lateral support while not sacrificing comfort.

Despite all the sporty touches, the GS F retains a luxurious feel, thanks partly to the high-grade Alcantara on the door trims, center console and above the instrument panel. An analogue clock adds a touch of class to the already elegant dashboard that features a central video monitor controlled by a Remote control on the center console. The GS F is available with a premium 17-speaker Mark Levinson audio system that will satisfy the most demanding of audiophiles, but when you want to listen to the music provided by the engine, simply activate the Active Sound Control by putting the drive system into “Sport S” or “Sport S+.” The Active Control System – similar to the one found in the RC F but better because it also utilizes the speakers at the rear seats; enhances the vehicle’s robust exhaust note for all the GS F’s occupants to enjoy, perfectly complimenting the sporty driving experience.

“Fun to drive. It’s what characterizes all cars wearing the F badge, and it was our intent to design the GS F to exude that character. The styling philosophy of the GS F is one of form following function. For example, the GS F’s spindle grille was born to further improve the car’s aerodynamics and internal cooling, while the air outlets in the front fenders, first applied in the IS F and then the RC F, has been adopted in the GS F because of its efficiency. The styling direction of the GS F is one that promotes Lexus’ commitment to ‘Progressive Luxury,’ and I feel this car conveys that brand message flawlessly,” Yoshiharu Nakajima, the Project Chief Designer of the Lexus Design Division, said.

Employing the millimeter wave radar and camera system to detect cars and pedestrians in front, Lexus vehicles, including the GS F, will come with a multi-functional safety package which includes Pre-Collision System (PCS) that provides alerts, brake assist and automatic braking for collision-avoidance support and reduction of collision damage if it should happen. Also included are Lane Departure Alert (LDA) to warn the driver in case of an unintended lane departure and Automatic High Beam (AHB) for improved night time vision.

Motorsports has always been a heritage at Lexus, evidenced by its active participation in the Super GT racing series since 2006 when it introduced the SC 430 GT500 racecar, and while having introduced RC F to Super GT racing series in 2014. And with the introduction of the RC F GT3 concept last year, Lexus has every intention to be part of the international GT3 competition in 2015. As further proof of its intentions, the company has introduced a Lexus Racing logo at the North American International Auto Show.