TOKYO, JAPAN January 31, 2017 — Lexus International today announced the 12 finalists for the Lexus Design Award 2017. First launched in 2013 to help stimulate the ideas necessary to build a better tomorrow, Lexus is celebrating the fifth anniversary of this international design competition that supports up-and-coming designers and creators worldwide. Lexus Design Award 2017 drew 1,152 entries from 63 countries under the theme of “Yet.”

As the philosophical soul of Lexus innovation, “Yet” is particularly appropriate for the fifth anniversary of this Lexus event. “Yet” inspires us to find synergy effects by fusing seemingly incompatible goals – spacious yet aerodynamic design– for example. By harmonizing contradictory elements, “Yet” opens up visionary frontiers of progressive design and technology to deliver amazing, new experiences to the world.

In November 2016, a panel of world-renowned designers and creative mentors gathered to judge the entries. After rigorous evaluation and extensive discussion, the judges chose 12 finalists.

Out of these 12 finalists, the following four were selected to prototype their designs, mentored by globally recognized creators:

A capsule for mobile living, Having nothing YET Everything.

A structure to experience the existence of Light YET Shadow.

Vegetable YET a Musical instrument provides fun and learning experience.

Static YET Changeable structure depending on viewpoint.

The four completed prototypes will be featured as part of the Lexus exhibition at this year’s Milan Design Week, along with presentation boards introducing the other eight finalists’ designs. The event will run from April 3 (press and award presentation day) through April 9. On April 3rd, the finalists will present their designs to the judges and international media. The judges will evaluate the four prototypes and announce the Grand Prix winner, marking the climax of the Lexus Design Award 2017 award cycle.

Further details on the Lexus presence at 2017 Milan Design Week* will be announced in mid-February on the Lexus Design Award website.

* The world’s largest design exhibition, also known as Salone Del Mobile, presents events and exhibits by brands and designers in many categories including furniture, fashion and textiles. 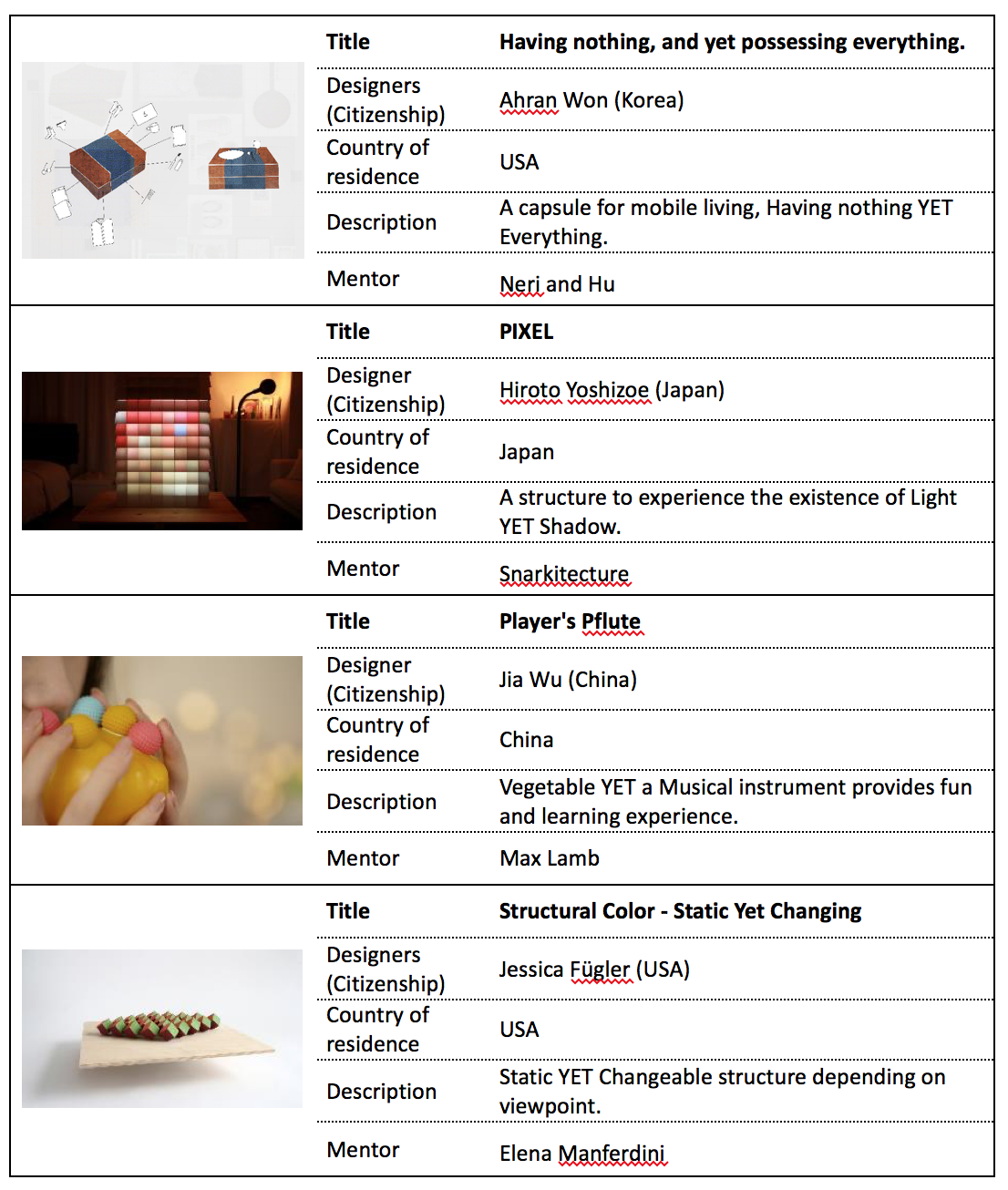 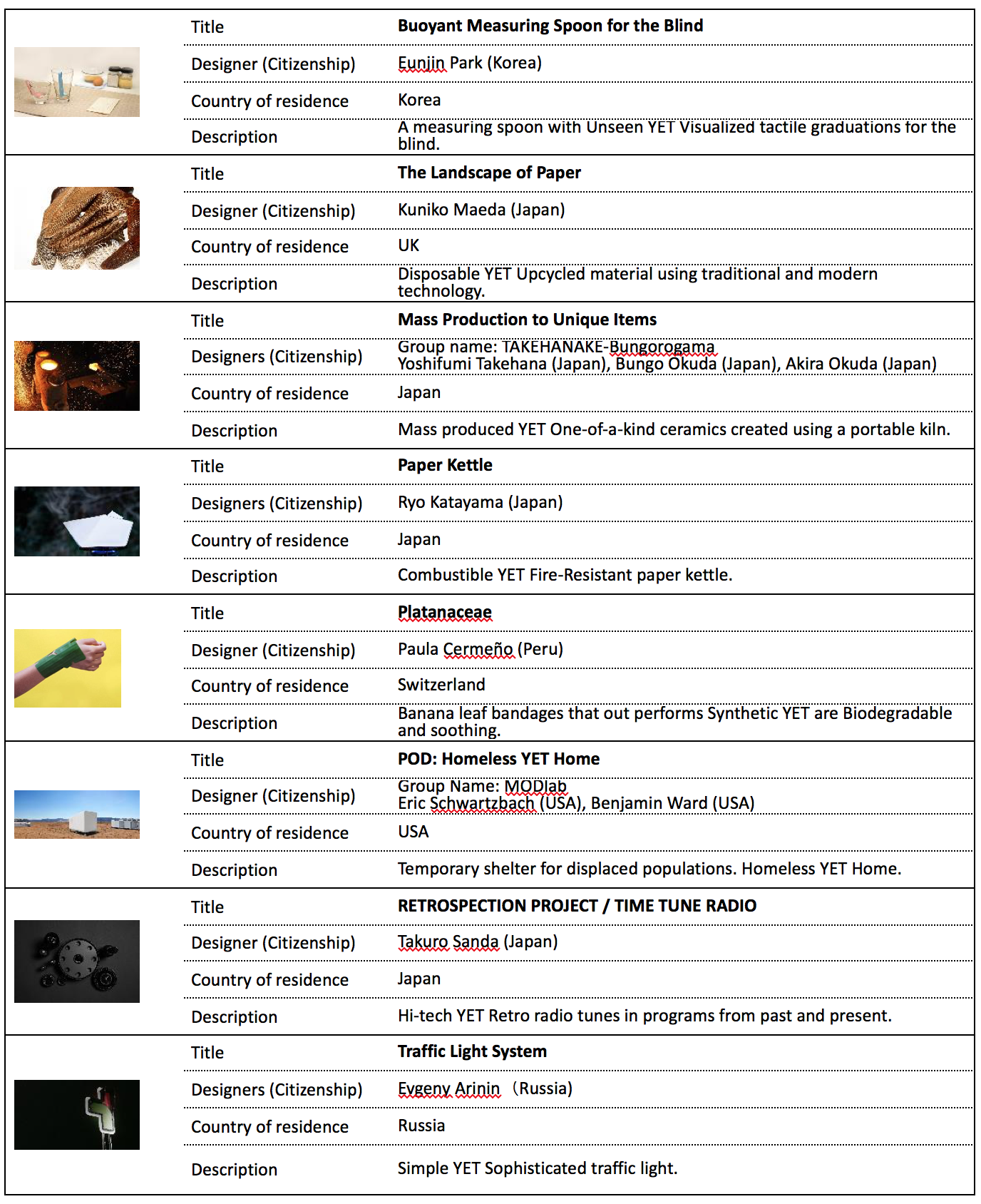 Antonelli joined The Museum of Modern Art in 1994 and is a Senior Curator in the Department of Architecture and Design, as well as MoMA’s Director of Research and Development. She has lectured at TED, the World Economic Forum in Davos, and several other international conferences. Her goal is to insistently promote understanding of design until its positive influence on the world is fully acknowledged and exploited. She is currently working on several shows on contemporary design, and on States of Design, a book about the diversity and variety of design fields that exist today.

Aric Chen / Curator
Aric Chen is Lead Curator for Design and Architecture at M+, the new museum for visual culture currently under construction in Hong Kong’s West Kowloon Cultural District. He previously served as Creative Director of Beijing Design Week, leading the successful relaunch of that event in 2011 and 2012. Chen has curated and organized numerous exhibitions and projects at museums, biennials and other events internationally, and has been a frequent contributor to publications including The New York Times, Monocle, Architectural Record and PIN-UP.

Alice Rawsthorn writes about design in the International New York Times and frieze.  Her latest book Hello World: Where Design Meets Life explores design’s impact on our lives: past, present and future.  She speaks on design at global events including TED and the World Economic Forum’s annual meetings at Davos, Switzerland.  Based in London, Alice is chair of trustees of the Chisenhale Gallery and the contemporary dance group Michael Clark Company, and a trustee of the Whitechapel Gallery.  She was awarded an Order of the British Empire (OBE) for services to design and the arts.

Yoshihiro Sawa / Executive Vice President of Lexus International
Yoshihiro Sawa graduated with a Bachelor of Science degree in Engineering and Design from Kyoto Institute of Technology. He has held a number of design-related positions since joining Toyota Motor Corporation in 1980, including Chief Officer of Global Design, Planning Division. He became Executive Vice President of Lexus International in April 2016.

Lyndon Neri and Rossana Hu, cofounders of Neri & Hu Design and Research based in Shanghai, have been working on projects around the world which incorporate overlapping design disciplines to create a new paradigm in architecture. In 2014, Wallpaper* announced Neri & Hu as 2014 Designer of The Year. In 2013, they were inducted into the U.S. Interior Design Hall of Fame. Neri & Hu believes strongly that research is a key design tool as each project brings its own unique set of contextual issues. Providing architecture, interior, master planning, graphic and product design services, Neri & Hu recognizes that contemporary problems relating to buildings extend beyond the boundaries of traditional architecture. Rather than starting from a formulaic design, Neri & Hu’s work is anchored in the dynamic interaction of experience, detail, material, form and light.

Max Lamb’s work plays with the tradition of the working rural landscape — the beach as foundry, the quarry as workshop, felled yew trees of the Chatsworth estate as subject and source material. He is equally fascinated by the city, and his ability to adapt and respond to different environments produces designs that are uniquely of their time and place.

Max is not committed to a single material or process, nor is he attracted to design as a means to solve problems. Rather he exploits the qualities inherent in a material to draw out its natural tendencies and beauty. His methods are high- and low-tech, and he is both designer and manufacturer, collaborating with foundries and factories as the scale or complexity of the project necessitates. However, there is continuity in the principles that he applies — honesty to material, a celebration of the process and of human capability, and its limitations. 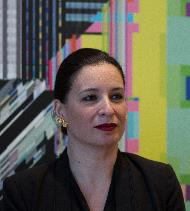 Elena Manferdini, founder and owner of Atelier Manferdini, with offices in Venice, California, has completed design, art and architectural projects in the United States, Europe and Asia including the Pavilion of the Museum of Contemporary Art in Los Angeles. Her firm has collaborated with internationally renowned companies such as Swarovski, and Sephora and her work has been featured in journals and publications including Elle, Vogue and the New York Times. Currently Graduate Chair at the Southern California Institute of Architecture she exhibits internationally and lectures widely having spoken at MIT, Princeton, Tsinghua University and Bauhaus. She was recently awarded the 2013 COLA Fellowship to support the production of original artwork. In 2011 she received a prestigious annual grant from United States Artists (USA) and her Blossom design for Alessi received the Good Design Award. 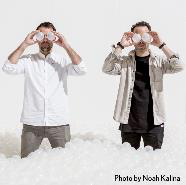 In 2008 Daniel Arsham and Alex Mustonen founded Snarkitecture, a collaborative and experimental practice operating in territories between art and architecture.  Sharing a mutual interest in the intersection of art and architecture since their student days together at Cooper Union in New York, their first commission was for Dior Homme. Deriving its name from Lewis Carroll’s fanciful poem “The Hunting of the Snark”, Snarkitecture designs permanent, architectural scale projects and functional objects with new and imaginative purposes, creating moments of wonder and interaction that allow people to engage directly with the surrounding environment. Transforming the familiar into the extraordinary, Snarkitecture makes architecture perform the unexpected.

First launched in 2013, the Lexus Design Award is an international design competition that targets up-and-coming creators from around the world. The award seeks to foster the growth of ideas that contribute to society by supporting designers and creators whose works can help to shape a better future. This provides a unique opportunity for four finalists to work with globally recognized designer as a mentor to create prototypes of their designs, and then exhibit them at one of the design calendar's most important events.

Since its U.S. market debut in 1989, Lexus has earned a worldwide reputation for high-quality products and exemplary customer service. Renowned for the superior reliability of its vehicles, Lexus is the luxury hybrid leader, offering hybrids that combine innovative technology and premier luxury. To date, Lexus has grown into 90+ markets worldwide. The evolution of Lexus is not only reflected in the progressive designs of its latest vehicles, but also in the brand’s mission to captivate the next generation of luxury consumers with consciousness, products, and services that are visionary, original and exciting.  http://www.lexus-int.com.

English, Awards, Corporate
‹ back
Every effort has been made to ensure the product specifications, equipment, and content on this site are accurate based on information available at time of publishing. In some cases, certain changes in standard equipment or options may occur, which may not be reflected online. Toyota Canada reserves the rights to make these changes without notice or obligation.