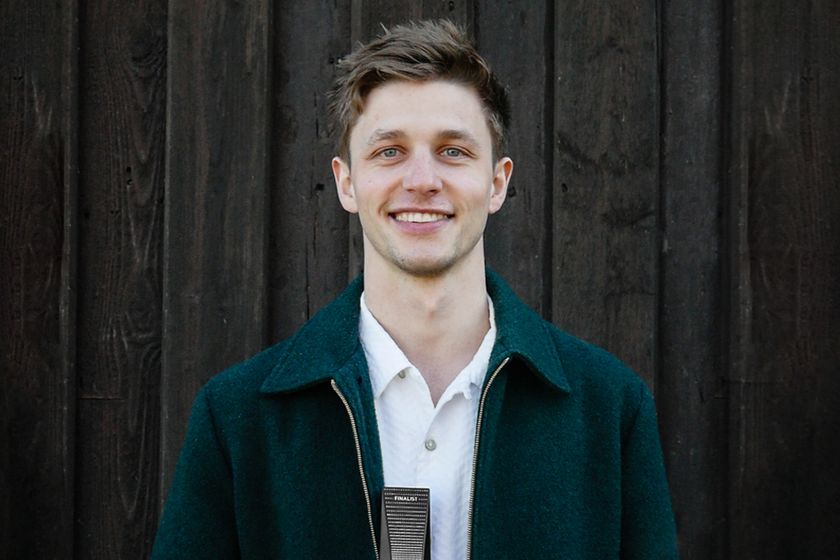 Chosen as the project that best encompasses “Design for a Better Tomorrow” based on the three key principles of the Lexus brand -- Anticipate, Innovate and Captivate -- the Portable Solar Distiller provides clean drinking water from polluted water or sea water, using sunlight. Merging local resource production with community architecture, this low-tech solution also serves as a shaded gathering place.

"It’s a great honour to be selected as this year’s Grand Prix winner, and I’d like to say thank you to the judges. When you look at the level and quality of the finalists and their projects and the progress that has been made throughout, any one of us could have been the winner this year. I’d also like to thank the Mentors - their expertise in a variety of fields really strengthened not only our designs but us also as designers,” said Henry Glogau. “We as finalists will cherish the thought-provoking questions and conversations we had, and we were so fortunate to experience them. And lastly, a massive thank you to Lexus. Being part of a prestigious award like this with a company that is truly passionate about Design for a Better Tomorrow, and which gives up-and-coming designers a platform and solid foundation to build their design futures on is incredible".

“Congratulations to the winner and it worked so well and provided mentorship and resources that let great ideas flourish. The winner was one of the designers who surprised me the most from the application to the final submission,” said Greg Lynn, Judge. “The consistent mission of the winner persisted while the transformation in scale and social function was exemplary. The design became more refined, more functional and more open source during the process. The ability to produce working prototypes was important to all the participants but to the winner it pointed towards the manifold potential of the system that became much more than just a product or appliance but instead a portable, deployable infrastructure”.

The six finalists, selected in January of this year, were mentored by Joe Doucet, Sabine Marcelis, Mariam Kamara, and Sputniko!. These four world-class creators guided the finalists in surmounting challenges on the way to the fully-refined proposals. The mentoring process was a once-in-a-lifetime experience that is certain to impact each finalist’s career on the international design stage.

Lexus thanks the mentors, all vastly experienced masters of their fields, for generously sharing their specialized knowledge and encouraging the finalists to bring out the full potential of their ideas.

Lexus also pays tribute to Paola Antonelli, Dong Gong, Greg Lynn and Simon Humphries, the elite panels who judged the entries. Their uncompromising standards and incisive analysis make it possible for the Lexus Design Award to fulfill its mission of supporting the next generation of creators.

All six finalists, including the Grand Prix winner, Henry Glogau, have honoured us with their lively curiosity, professional attitude toward their work, and the impressive proposals that their creativity has brought into this world.

ABOUT LEXUS CANADA
Lexus Canada is the exclusive Canadian distributor of Lexus luxury cars and sport utility vehicles through a sales and service network of 39 dealers across Canada. Guests have access to a wide range of luxury and performance vehicles with a total of 12 Lexus nameplates available in Canada, including the largest luxury hybrid lineup of 6 hybrid models. Inspired by bold design, intuitive technology, and peak performance, Lexus is committed to delivering the highest quality products and services and creating amazing experiences for their guests. The Lexus RX 350 and RX 450h are built at Toyota Motor Manufacturing Canada’s (TMMC) award-winning Cambridge South plant. For more information about Lexus and Lexus products, please visit: www.lexus.ca.

ABOUT LEXUS DESIGN AWARD
Launched in 2013, the Lexus Design Award is an international competition for up-and-coming creators from around the world. The Award seeks to contribute to society by supporting designers and creators whose work shows potential to shape a better future. Six finalists gain a rare opportunity to prototype their designs under the mentorship of leading designers. The Lexus Design Award provides global media exposure to drive professional career advancement.

PAOLA ANTONELLI
SENIOR CURATOR FOR THE DEPARTMENT OF ARCHITECTURE AND DESIGN AT MoMA, NY

Modern Art, as well as MoMA’s founding Director of Research & Development. Hergoal is to promote design’s understanding, until its positive influence on the world isuniversally acknowledged. Her work investigates design’s impact on everydayexperience, often including overlooked objects and practices, and combining design,architecture, art, science, and technology.

She has curated shows, written books, lectured worldwide, and taught in severalschools, including Harvard and UCLA. Following the XXII Triennale di Milano in 2019––Broken Nature, devoted tothe idea of restorative design, now on view in reduced format at The Museum of Modern Art–– she has opened atMoMA the exhibition Material Ecology, on the work of architect NeriOxman. She is currently working on several newsessions of her MoMA R&D Salons; and on the Instagram series @design.emergency––conceived with design criticAlice Rawsthorn––devoted to the role of design in the Covid-19 pandemic and beyond.

Greg Lynn is the founder and owner of Greg Lynn FORM and co-founder and CEOat the robotics company Piaggio Fast Forward. In addition to buildings he has designedhigh performance sailboats, high technology robots, as well as furniture and consumerproducts for Vitra, Alessi, Swarovski, and Nike. He has served on numerous corporateexecutive and advisory boards and is a member of the Board of Trustees of theCanadian Centre for Architecture.

He won the Golden Lion at the Venice Biennale of Architecture and represented theUnited States in the American Pavilion at the Venice Biennale of Architecturetwice. He received the American Academy of Arts & Letters Architecture Award and was awarded a fellowship fromUnited States Artists. He is currently o. Univ. Prof. Arch. at the angewandte Wien and Studio Professor at UCLA. Hewas the Davenport Professor at Yale University, Professor of Spatial Conception at the ETHZ, adjunct faculty atColumbia University and visiting faculty at Harvard GSD. He is the author of nine books.

Simon Humphries is Head of Toyota & Lexus Global Design. He was appointed to overseedesign for both brands in 2018. As Head of Lexus Global Design Humphries seeks to defineLexus' unique values in the form of a brand philosophy, incorporating a clear culturalreference to Lexus' Japanese heritage and building a design direction that is relevant to usersaround the world.

Humphries joined the company in 1994. His many roles in leadership and advanced designinclude defining the signature spindle grille that has become an icon for the Lexus brand. In2016 he became President of ED2 (Toyota Europe Design Development) where his teamspearheaded development of mobility concepts such as the Toyota e-Palette concept as partof the brand’s transition from an “automotive company” to a “mobility company.” Humphries beganhis career in design in 1988 when he was awarded the Royal Society of Arts Bursary Prize for Product Design in theU.K. The award gave him the opportunity to work for Sony, which jumpstarted his passion for living and working in Japan.In his spare time Humphries enjoys carpentry and is restoring a 100-year-old Japanese farmhouse.

A designer, entrepreneur, inventor and creative director, Joe Doucet is one of the most sought-after creative talents working in the United States today. His work deftly hybridizes function and visual appeal while conveying layers of meaning and message. Doucet believes that design and, more importantly, a designer’s thought process, can play a larger role in innovation and problem solving, as well as aesthetics. He currently holds numerous patents for his designs and inventions.

Doucet’s work has been exhibited globally and has received numerous international awards, including a WorldTechnology Award for Design Innovation and multiple Good Design Awards. Doucet was named the 2017 Winner of the Smithsonian Cooper-Hewitt National Design Award as Product Designer—the highest honour in his field. He is also Designer of the Year 2019 finalist by Dezeen, and a recipient of Fast Company’s Most Important Design Companies of 2019.

Mariam Kamara, an architect from Niger, studied architecture at the University of Washington. In 2014, Kamara founded atelier masōmī, an architecture and research practice tackling public, cultural, residential, commercial and urban design projects. Kamara believes that architects have an important role to play in creating spaces that elevate, dignify, and provide people with a better quality of life. Collaborative project, Hikma Religious and Secular Complex, won the 2017 Gold LafargeHolcim Award for Africa and Middle East, and 2018 Silver GlobalLafargeHolcim Award for Sustainable Architecture. An upcoming project, the Niamey Cultural Centre, is designed by Kamara under mentorship of Sir David Adjaye as part of the Rolex Mentor and Protégé programme. 2019 saw Kamara named as a Laureate of the Prince Claus Award and a 2019 Royal Academy of Arts Dorfman Awards finalist. 2020 saw The New York Times name her as one of 15 Creative Women of Our Time. atelier masōmī made its debut on the 2021 AD100 list.

Sabine Marcelis is a Dutch designer who runs her practice from the harbour of Rotterdam. After graduating from the Design Academy of Eindhoven in 2011, Marcelis began working as an independent designer within the fields of product, installation and spatial design with a strong focus on materiality. Her work is characterized by pure forms which highlight material properties. Marcelis applies a strong aesthetic point of view to her collaborations with industry specialists. This method of working allows her to intervene in the manufacturing process, using materialresearch and experimentation to achieve new and surprising visual effects for projects bothshowcased in musea and commissioned by commercial clients and fashion houses.

Sputniko! is a British-Japanese artist and speculative designer based in Tokyo. She creates film and multimedia installation works which explore the social and ethical implications of emerging technologies, especially in the themes of gender and sexuality. She has presented her works in exhibitions such as the 2016 Setouchi Art Triennale, Milan International Design Triennale, Broken Nature (2019), Future and Arts at the Mori Art Museum (2019). From 2013 to 2017, Sputniko! Was an Assistant Professor at the MIT Media Lab, where she founded and directed the Design Fiction research group. She is currently an Associate Professor of Design at Tokyo University of the Arts. To date, she has had pieces included in the permanent collections of museums such as the

V&A and the 21st Century Museum of Contemporary Art, Kanazawa.

English, Corporate
‹ back
Every effort has been made to ensure the product specifications, equipment, and content on this site are accurate based on information available at time of publishing. In some cases, certain changes in standard equipment or options may occur, which may not be reflected online. Toyota Canada reserves the rights to make these changes without notice or obligation.