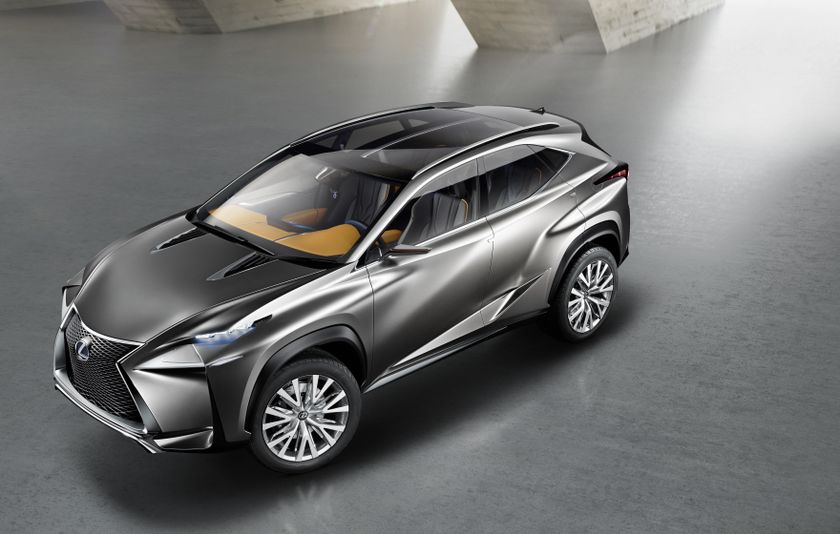 ‘We intend to take advantage of the growing compact crossover SUV segment and expand our SUV line-up in the future. The new LF-NX concept explores the potential for a compact crossover within the Lexus model range. This concept is youthful, confident and innovative. It features a new bold look that gives an insight into the future evolution of the Lexus L-finesse design language.’
- Mark Templin, Executive Vice President, Lexus International
Toronto, ON., September 10, 2013 – With the launch of the first RX in 1998, Lexus pioneered the premium crossover segment, combining, for the first time, all the flexibility, practicality and durability of a Sports Utility Vehicle with the handling, performance, refinement and ride of a premium sedan.
More compact than the RX at 4,640 mm long with a 2,700 mm wheelbase length, the LF-NX concept focuses on the growing segment of smaller, more urban-centric compact premium crossovers.
Exterior Design
The LF-NX concept’s bold, striking and innovative exterior reflects a further evolution of Lexus’ L-finesse design language, bringing more distinctive and sculpted styling to the premium compact crossover segment for the first time.
The front of the new concept is dominated by a strong interpretation of the Lexus spindle grille. Both the chrome trim and grille mesh pattern increase in size as the grille widens through the lower bumper area, to accentuate the concept’s wide front track and powerful stance.
The upper edges of the grille generate powerful lines which define the bonnet edges, whilst the base is underscored by a chrome-finished undertray which expresses the crossover concept’s off-road credentials.
Extremely expressive, signature front lighting features three diamond-shaped LED headlamps and the independent Daytime Running Lights (DRL) first seen on the new IS sedan. The DRLs are underscored by full-length LED strip turn signal lamps.
The lower bumper flows away from the spindle grille edges into vertical air intakes, before projecting strongly forward into a unique corner detail. This separates the bumper from the front wing with an aggressive vertical cut detail that narrows to a point beneath the headlamp clusters.
Both front and rear wings are formed by a series of muscular, concave and convex curves. And the wheel arches incorporate black painted trim, hinting at the protective finish which typifies an urban crossover.
The belt line forms a pronounced diamond shape in plain form. This reaches its widest point adjacent to the B pillar before narrowing as it flows astern. Below, the door sills generate a more aggressive, angular interpretation of the rising crease line first seen on the LF-CC concept.
Above the belt line, the classic Lexus side glazing profile combines with a steeply raked tailgate and integral spoiler to create the sweeping silhouette of an athletic coupe.
The rear of the LF-NX is dominated by highly articulated lamp clusters which create an instantly identifiable light signature. They extend the full depth of the bumper, creating a sharp, aerodynamic trailing edge detail.
The classic Lexus ‘L’ shape of the lamp itself is scored strongly into the rear bodywork, creating an echo of the front spindle grille form.
The wide lower bumper has been deliberately detailed without a visible exhaust system, in recognition of the full hybrid powertrain’s environmentally-friendly credentials.
The Lexus LF-NX concept is finished in a new Brushed Metal Silver exterior colour which gives the striking impression that the bodyshell has been carved from a single billet of solid metal.
Interior Design
In a continuation of the ‘Human Oriented’ L-finesse design concept realized in both the LFA and new IS, the interior mirrors the LF-NX’s highly sculpted exterior styling. It features bold, powerful forms which create a driver-focused cockpit within an ergonomically ideal environment.
The centre console extends the full length of the cabin to bisect the rear seats. Its highly three-dimensional framework echoes. The framework’s bright, brushed metal finish has also been applied to the driver’s instrument meters, the steering wheel, the seat structure and the overhead console.
Reinforcing the LF-NX concept’s premium SUV credentials, the strength and refinement of this carved metal surfacing is complemented throughout the cabin by black and Sunrise Yellow leather upholstery with contrast stitching, and sophisticated blue instrument and switchgear lighting.
Intuitive interaction with the vehicle’s switchgear, instrumentation and Human Machine Interface (HMI) technology is at the heart of Lexus interior design. And the LF-NX cabin features the ideal, upper display zone and lower operation zone dashboard format perfected over successive Lexus generations.
The upper display zone features an exclusive driver’s instrument meter design
The lower operation zone allows access to a new generation of touch-sensitive, electrostatic switches on door trim, and the new Lexus Remote Touch Interface (RTI). New RTI combines a touch tracer display with a new touch pad design for smooth and intuitive use, and an adjustable arm rest support comfort and ease of use.
Powertrain
The LF-NX concept is equipped with a full hybrid powertrain tuned for SUV performance. This highly efficient Lexus Hybrid Drive system targets class-leading CO2 emissions.
The full hybrid drive system combines a 2.5 litre, four-cylinder Atkinson cycle gasoline engine with a powerful electric motor to drive. At lower speeds, the LF-NX can operate under electric motor power alone.
The LF-NX’s highly efficient full hybrid powertrain targets performance on par with conventionally powered rivals, whilst returning outstanding fuel consumption and class-leading CO2 emissions.
-30-