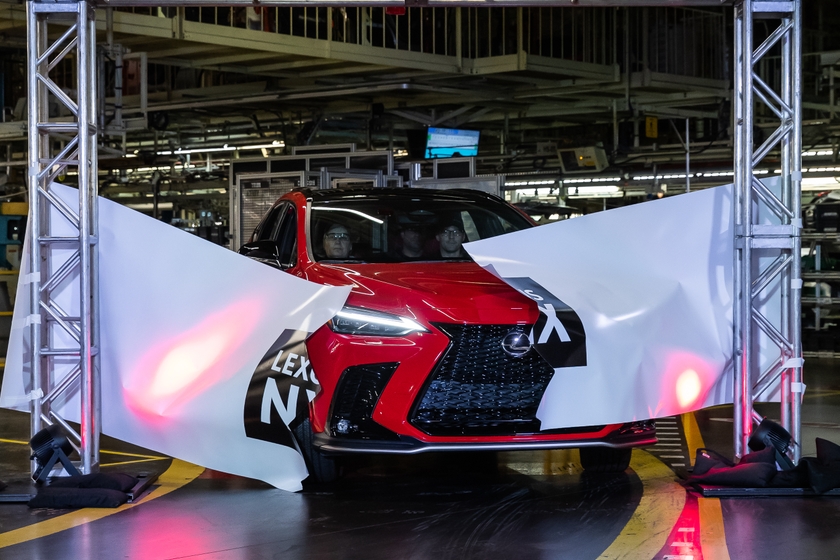 In 2003, TMMC became Toyota’s first facility outside of Japan entrusted to produce Lexus vehicles – a tremendous honour within Toyota – and has since made more than 1.5 million Lexus RX and Lexus RX Hybrid vehicles.

“Being selected to build the Lexus NX and Lexus NX Hybrid luxury vehicles reflects the trust that Toyota Motor Corporation has in our world-class Canadian team members, our commitment to quality, and our customer focus,” TMMC President Frank Voss told employees at a recent event celebrating the first vehicle off the line. “Like Lexus, TMMC’s culture is extremely focused on quality. In fact, this commitment to quality has made us one of the very best automotive manufacturing companies in the world. Our dedication to quality and the hard work of our Team Members has earned TMMC a total of 20 J.D. Power Awards – more than any other auto manufacturing plant in the Americas, and the second most of any plant globally.”

In 2018, TMMC announced a CDN $1.4B investment (including supporting funds from the federal and provincial governments), converting its North and West plants to the company’s Toyota New Global Architecture (TNGA) platform to allow for increased flexibility, further production efficiency, and superior products. This strategic investment allowed TMMC to shift its production to meet the demands of North America’s rapidly growing SUV and electrified vehicle markets, initially through the production of the market-leading Toyota RAV4 and Toyota RAV4 Hybrid. This production line now adds Lexus NX and Lexus NX Hybrid to the mix.

“Not only are we Canada’s largest auto manufacturer, we’re also Canada’s leading maker of electrified vehicles,” added Voss. “TMMC has been producing high-tech electrified vehicles – including the Toyota RAV4 Hybrid and the Lexus RX Hybrid - for almost a decade. We’ve invested over nine billion dollars in our Canadian production facilities so far, and we’re already producing North America’s best-selling hybrid SUV and best-selling luxury hybrid SUV. Now, we’re adding the all-new Lexus NX and NX Hybrid – both absolutely loaded with the latest technology - and their production has meant a significant investment into TMMC.”

TMMC has manufactured vehicles in Canada for more than 30 years and currently employs more than 8,500 team members at its facilities in Cambridge and Woodstock, Ontario.  Committed to producing vehicles in Canada, Toyota has invested more than CDN $9.2B in its Canadian operations since 1985, and has built more than nine million vehicles over that period of time.

Crafted right here in Canada, the 2022 Lexus NX sets the stage for the next chapter of the Lexus brand.

The next chapter for Lexus is centered around four pillars: Design, Lexus Driving Signature, Electrification and Advanced Technology. The all-new NX plays a key role in leading the brand forward on each of these dimensions.

Design: The NX has been redesigned from the inside out. Every exterior surface has been reimagined. The signature spindle grille has been refined in the front. And, perhaps the most notable expression of future Lexus design is the elegant new block letter ‘LEXUS’ rear badging and full-width tail lamp.

Lexus Driving Signature: Lexus Driving Signature results from an entirely new approach to vehicle development, wherein all performance characteristics and tuning decisions are approved at the highest level of the organization. This ensures a uniquely Lexus experience where each vehicle exhibits a direct, linear driving feel that is consistent across the lineup.

Electrification: For the second generation NX, Lexus doubles down with two electrified options, including a 2.5-liter hybrid powertrain on NX 350h, and the first plug-in hybrid electric Lexus model, the first NX 450h+.

Advanced Technology: The biggest enhancement to in-vehicle technology is the introduction of the all-new Lexus Interface multimedia system. Developed in North America, Lexus Interface uses a standard 9.8-inch touchscreen to put an array of multimedia features within easy reach. On select models, the available 14-inch touch screen – a first for NX – delivers an even more immersive multimedia experience. Lexus Interface incorporates a new virtual assistant, developed with a human-centric approach and intended to be the primary way in which guests interact with the new multimedia system. The system enables a voice-first approach to access navigation, media, phone, and certain vehicle features such as the climate control system and window opening/closing.

Toyota Motor Manufacturing Canada Inc. (TMMC) manufactures the Toyota RAV4, RAV4 Hybrid, Lexus RX 350 and RX 450h and Lexus NX and NX hybrid) at three manufacturing facilities in Ontario. TMMC is the most awarded auto plant in the Americas and the second most awarded plant globally. It employs approximately 8,500 Canadians, has the capacity to produce more than 500,000 vehicles annually and has been Canada’s highest volume automotive manufacturer over the past five years.